A Rug for Biscuits 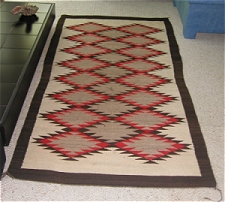 The rug near my hearth is near to my heart also. It’s what we might call a “family heirloom”. Each time I run my hand over the tightly woven wool, I marvel at the strength of it – at the strong colors, and the bold design, and the silky feel of it. 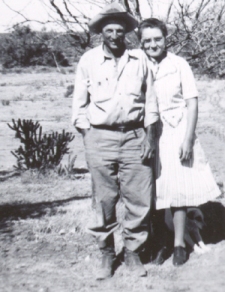 It wasn’t always mine. It was my father’s before me, and it came to our family from the Navajo People sometime in the early 1900s … here’s the story:

Katie Wynema Caldwell (24 Dec 1897 Hammond, Custer Co, OK – 24 Apr 2000 Lovington, Lea Co, NM) was born in a dugout on Christmas Eve, just hours after her parents arrived at their Oklahoma homestead in a wagon. She made light of her own story of growing up on the prairie just miles from the Cheyenne Reservation, and usually began the telling in earnest with her trip to New Mexico with grandparents George Washington Wood (25 Dec 1845 Hall Co, GA – 28 Feb 1934 Lovington, Lea Co, NM) and Jessie Loucinda Cauble (04 Jan 1853 Hill Co, TX – 08 Oct 1923 Lovington, Lea Co, NM) in February 1917. By July of that year, Katie was married to cowboy Erastus Jackson Windsor (13 May 1891 Floyd Co, TX – 23 Feb 1969 Portales, Roosevelt Co, NM), and within a few days of their marriage, she and Rastus went with his mother and brothers to Quemado in Catron Co, NM. In a story written for Then and Now: Lea County Families (published in 1979 by the Lea County Genealogical Society, Lovington, NM), Katie notes that they lived “ten years in the mountains and eleven years near Holbrook, AZ” before coming back to settle on a ranch near Milnesand in Roosevelt Co, NM.

When I was a child in the 1950s, we visited Katie and Rastus on the ranch near Milnesand, and I saw the rug on her floor for the first time. [Note: This is the same visit that she woke my little brother and I up at 4:00am to ask us if we wanted fried chicken or fried steak for breakfast!] According to Katie’s story, she was alone at home frequently when Rastus rode out to work cattle on the open range. On one of these occasions, she looked out the window to see a row of Indians on horseback. They were just sitting on their horses watching the house. Katie was terrified but determined not to show it. Her first thought was to bake biscuits! So she whipped up a pan of biscuits and took them out to her visitors with butter and honey. All of the biscuits were gratefully consumed and the Indians left forthwith. Days later, the rug appeared on Katie and Rastus’s wooden porch steps, all rolled up and tied with rope.

So we were told, this ritual was repeated throughout the years. Indians appeared, biscuits were baked and distributed, and Native American treasures would later appear on the steps. There were pieces of silver and turquoise jewelry, as well as other rugs and trinkets.

Jim Windsor, son of Jesse Perry Windsor (Rastus’s brother) and Katherine Modean Lloyd (daughter of Ulmer Lee “Birdie” Wood and Charles Jackson Lloyd), has helped piece together a figurative map that pinpoints the ranch near Holbrook, AZ where these exchanges took place. He notes colorfully that “for a while they lived on the Dead River on the edge of the Painted Desert … and I think they lived at Stinking Springs”. And Jim continues, “They had the place near Holbrook” and it was “not far from the place identified as Cool Water” on a current map. According to Jim, “The Navajos were all around those places and they used to go by on the way to the annual hunts”.

Holbrook is in Navajo County and is just miles from the reservations of the Navajo, Hopi and Zuni Indians. The simple kindness of baking biscuits for her neighbors reaped such bounties – for our Great Aunt Katie and for us, too. Recently, Jim told me, “Katie was the only one of the family that would have taken food out to the Indians. My mother always took us all in the house and bared the door when they came by our place, she was sure they would take her and the kids off, never to be seen again. Katie always thought they were just like we were and needed a bite to eat and something to drink. She was like her Aunt Birdie in that respect. God knows, they were great women. I wish they still made them that way.”

Jim Windsor (now deceased) lived in Clovis, CA. The rug has been from Arizona to New Mexico and Texas, and it is now in Georgia.