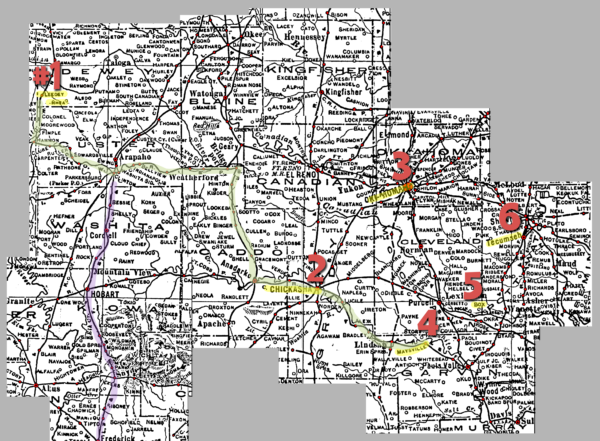 Click the map to open a large image in a new window.

For Denise:
I am hoping that you and Naomi can help me start a serious search for what happened to Adam David Rodgers.

“He was in Rhea visiting GB and Bessie in winter 1915. GB bought him a new suit of clothes, his ticket and $25 in cash to go home on the train. Bessie put his name on his coat somehow. They put him on the train at Leedey? Or Clinton? Bound for Ft Worth?. They received a telegram from him from Maysville asking for more money. GB wired him another $25. They never heard from him again.”

He had gone to Rhea after Nancy Redwine Rodgers kicked him out of their home in Fort Worth (or it’s possible that she just abandoned him). Stayed with Bessie and GB and had Bessie help him make an application for a Civil War pension — see dates on Pension Application Abstract below. It was denied. He was angry that he could not get a pension and apparently had no other source of income. Note that on the 1900 census, he clearly states that he “was NOT in Union or Confederate Army”.

If Adam Rodgers were on a train to Fort Worth, he would have gone due south from Arapahoe (the purple line). That would have taken him through Frederick where it’s possible that Anna and Jack Votaw lived.

But he ended up in #4 Maysville! Why did he go that direction?
#2 on the map is Chickasha. He had lived there with his family before moving to Fort Worth.

He likely did not have a home in Fort Worth any more, as Nancy had abandoned him or kicked him out. It appears that she may have left Fort Worth and gone back to the #6 Tecumseh area where the Redwine family lives.

Accounting for all of the children:
He just left Bessie and GB in Rhea.
Anna and Jack are either in Frederick or (later) #3 Oklahoma City.
Ida — unknown
Hettie or Henrietta — unknown
Hazel — unknown
Ruby and JJ Adamson are in Fort Worth in 1910 and back in #5 Box (near Wanette), OK by 1914. In 1920 they are in Eason, Pott County.
Alma and Will Henley are in Trousdale for their marriage in 1913 and then live in Eason.

James and Eda Redwine are getting up in years and live in Eason in 1910. By 1920, they are in the household of their son, Squire Redwine, in Lexington, Cleveland Co. Looks like James dies in OK and Squire moves his family to San Bernadino, CA where Eda Redwine dies?

Adam has a brother in Dallas and one also in Gainesville, TX. Frank Rodgers (married to Della Sawyer) is the one in Gainesville. My grandmother knew Frank and Della. BUT — Adam did not head south to Fort Worth — he headed east and was last yeard from in Maysville. That was not far from daughters Ruby and Alma.

He did telegraph for more money from Maysville — and that’s where it was sent to. But I guess he could have hopped back on the train and kept on going to who-knows-where with the money he got.

Abstract of his Confederate Pension Application

Adam Rodgers. Age 69. Born near Buffalo, Camden County, Missouri.
Has been living in Oklahoma for 4 years. (Likely not true?) Post Office Leedey in Dewey County.
In poor health. Cannot work. Does not have a home.
Served in Texas for about 6 months towards the end of the war. In Staffords Battery. Artillary.
Application made on 14 September 1915 and signed “Adam Rodgers”.
Notary: C. R. Flint. Witnesses George B. Rogers (Bessie’s husband) and Robert H. Parker.
Filed on 17 September 1915.
War Department response dated 28 September 1915.
Adam’s return notice of rejection dated 7 October 1915.