The word Estelusti is taken from a word in the Muskogee [Creek] language describing a black person. It is known that many Africans intermarried with Native Americans, but less widely known is the fact that many Native Americans also owned African slaves and fathered children with African slave women. As a result, thousands of Americans have black and Indian ancestry. Within the Five Nations — Cherokee, Choctaw, Chickasaw, Creek and Seminole, historians find thousands of records documenting the history of those African people living within the Indian Nations. More than 20,000 were adopted into these Nations at the end of the 19th century. 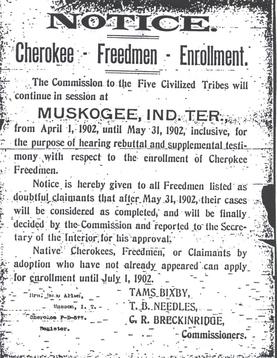 The First Known Black Indian Slave
In the battle of Talima, Cherokee and white settlers were fighting over land when a Indian warrier of some significance was killed. His wife was outraged by his death, and she ran to his side, seized his weapon, and killed her husband’s assailant. Her bravery was rewarded by her kin — and her prize on that day was an African slave. This woman rose to very high status in her nation and was given the honor of being a Guighau — a ‘Beloved Woman’ in the Cherokee Nation. Her name was Nancy Ward. By the 1820’s, she was a wealthy woman purchasing black slaves on her own.

Accumulation of Slaves in Indian Nations
The time between the late 1700’s and 1830 were critical years for Native People. The Cherokee, Chickasaw, Choctaw and Creek Nations’ culture underwent tremendous change. Being impressed with the white settlers communications through what he called “Talking Leaves”, Sequoya developed the Cherokee alphabet. Many within these nations were influenced by the mixed blood leaders, who preferred to dress like the European settlers. During this same time, missionaries descended upon the Nations bringing Christianity to offer as a replacement for traditional Native religious practices. The preferences of the mixed blood populis for the new lifestyle and culture gave these four Nations the nickname “Civilized” Tribes. One additional ‘institution’ was embraced by these Nations — black chattel slavery.

Removal to the West
By the 1820’s rigid slave laws had been written into the constitutions of the various Nations, and restrictions against marriage with persons of African descent were common place. The Treaty of Dancing Rabbit was signed in 1820 by a faction of leaders, agreeing to relocate to lands in the west, giving lands in the East to the burdgeoning United States. Beginning in the winter of 1831, a painful relocation of Native people took place. The devastating removal of the Cherokees, known as the Trail of Tears, resulted in the loss of life wiping out more than a third of their population. The sounds of the mournful cries were heard as loved ones died painful deaths during the journey westward. With these suffering people was another group feeling as much pain — their African slaves.

Life in the Territory
Wealthy mixed-blood tribal members put their slaves to work in the new Territory. The primary crop was cotton, and slave labor is named as a large factor in the financial success of some members of the Cherokee Nation. In their new home, slaves learned the language, customs, and culture of the Native People with whom they lived.

The Road to Freedom
In 1861, when the southern states seceeded from the Union, the Five “Civilized” Tribes quickly signed treaties with the Secessionists. Their concern was not one of states rights, as they were not a part of the United States. Their interest in the conflict centered over one issue — slavery; the Indians supported the institution and the right to maintain slaves. Very early in the war, the Cherokee Mounted Rifles and the Choctaw Rifles were formed in support of the Confederacy. Southern sympathies created some conflict in the Territory also. A faction within the Creek nation led by Chief Opothole Yahola did not wish to fight for the South, and three regiments of the Indian Home Guards were formed for the side of the Union. These regiments allowed blacks slaves and free persons of color to fight with their Indian masters. Meanwhile, many Cherokee slaves fled to Kansas during the conflict. When they opportunity came, they were among the first to volunteer to join the 1st and 2nd Kansas Colored Infantry fighting with US Colored Troops. The so-called ‘Battle for Freedom’ occurred on July 17, 1864, at place called Honey Springs. This was a most unusual battle. There were legions of white Union soldiers, white Confederate Soldiers, black soldiers in the US Colored Troops, black soldiers in the Indian Home Guards, Indians for the Union, and Indians for the Confederates. It was reportedly the dynamic action of the Kansas Colored that saved the day, making victory particularly sweet for Black Cherokee soldiers defeating their Confederate Cherokee slave owners in battle. The victory of the Union did not give freedom to the African slaves in Indian Territory. The Nations refused to release their slaves from bondage, claiming that they were not a part of the United States and not subject to its laws. Finally, the Treaty of 1866 was signed in Ft. Smith, Arkansas, and the slaves of the Indians were given their freedom.

Indian Freedmen and the Western Frontier
The years following brought more change and development in the United States, and the Freedmen of Indian Territory were again part of the story. These former slaves of the Indian Nations were bilingual, an asset to both factions in the settlement of the West. Additionally, their farming skills earned them a significant role in the production of food for many in the Territory. Eventually, the Nations were directed to adopt their Freedmen according to terms of the Treaty of 1866. The Cherokees and Creeks did early on, and the Choctaws reluctantly followed suit in 1885. The Chickasaws never adopted their Freedmen.

Part of the Trail of Tears originated in Pickens County near Talking Rock, and a strong Cherokee heritage is still felt in the area. This is a partial list of the surnames of Freedmen were adopted through the Dawes Commission between 1898 and 1916. There are many names that are familiar to Pickens County researchers as being early settlers of the area.